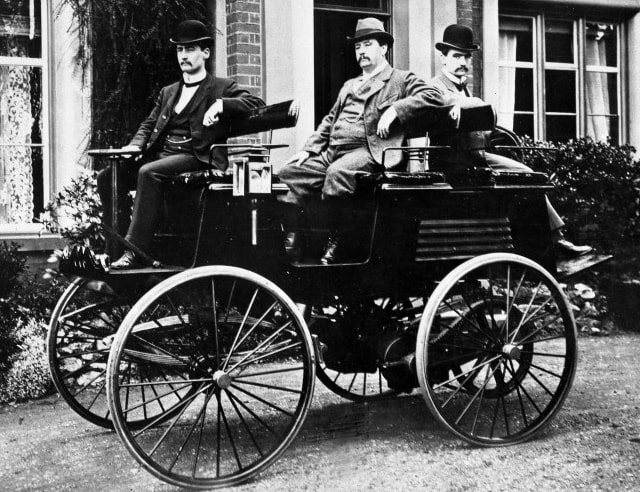 During the dawn of the electric automobile, the primary competition to EV did not come from internal combustion engines, but rather an even more environmentally-friendly form of transportation, the horse. Despite horse-powered mobility still being the primary mode of transportation in the late 19th century, the introduction of both electric and internal combustion vehicles forever mechanized personal transportation. Around the turn of the century, inventors from around the globe, most notably a youthful Thomas Edison, began developing battery-powered cars. These early EVs rapidly became popular, especially in densely populated cities, due to their silent operation and lack of noxious exhaust fumes. Other innovators of the electric car include Camille Faure, who improved the design of the lead-acid battery conceptualized by Gaston Planté; Robert Anderson, who invented the first crude electric carriage; and Ferdinand Porsche, who designed the first vehicle with an octagonal electric motor.

Surprisingly, these early electric vehicles charged much like the EVs of today (although early chargers lacked some of the more sophisticated features of the JuiceBox smart charger). Charging cables ran from wall mounted charging stations and were plugged directly into receptacles on the car. When drivers were finished charging, the cord would simply be unplugged from the vehicle and you were on your way with a full charge. Another popular method of charging early electric cars was to simply swap exhausted batteries with fully charged battery packs, with the empty batteries then being charged centrally in a ‘battery room’.

After the all-electric car fell out of favor with the general public, they would remain a nonfactor in the auto industry for nearly forty years, however, as gas prices began to climb in the late 1960’s public interest in alternative fuel sources began to stir. Around the same time, the first manned motor vehicle to drive on the moon was battery-powered. Like nearly everything involved with early lunar missions, this battery-powered rover garnered significant interest, further stimulating public curiosity in electric motors. Automakers even went as far as to make an attempt to capitalize on this spreading interest and introduced a handful of EV models in the 70’s and 80’s. Most notably the Sebring-Vanguard Citicar which sold 2,000 units, however interest in EVs once again began to wane.

It was not until the 1990’s that public interest in electric vehicles began to meaningfully gain momentum. In 1996, GM released the EV1, an all-electric vehicle designed from the ground up that would go on to gain a cult-like following, and a martyr-like image after the program was inexplicably killed. Electric powertrains once again made a splash in the mainstream market a year later in 1997, with Toyota introducing the first generation Prius Hybrid vehicle with a Prius battery. The Prius was a near-instant hit that whet the public appetite for alternative fuel vehicles, prompting scientists and automakers alike to take a renewed interest in EV development, setting the stage for the progress of the early 21st century.

• Baker Electric Car - Built in 1897, this model is the quintessential vintage car produced by the Baker Motor Vehicle Company.

• Model T - Another vintage car model produced by Ford during 1914.

• Detroit Electric Model 47 - One of the pioneering electric cars in the 20th century.

• Toyota Prius - One of the first hybrid car models released, and put Toyota in the electric car game.

As we look back at the long history and recent progress of electric vehicles, it is equally important to look to the future. Facing increasingly rigorous emissions standards and growing consumer support for electrification, automakers have put the pedal down on EV development. Record numbers of battery-electric and plug-in hybrid models are set to hit the market in coming years as EV market share continues to rise. These new EV offerings will cover nearly every market segment, from compact SUVs to semi-truck, providing consumers with an all-electric option to fit their exact needs. The range of electric vehicles has gotten longer, too, with the longest range electric car being the Lucid Air Dream Edition Range.

The question of, “What is better? Electric or gas cars?” might still stand, but the days of internal combustion engines and reliance on fossil fuel are numbered.