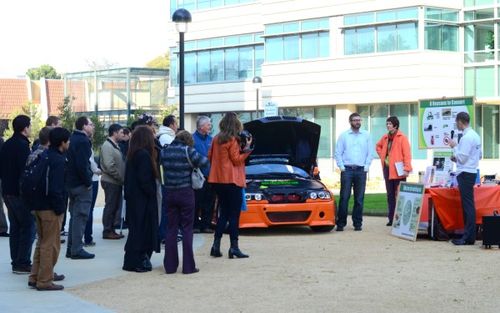 This is the second of the series of roadshows planned for the top 20 tech companies in the Bay Area - all part of the eMotorWerks promotion campaign precluding our public launch. On January 10, 2012 during the lunch hour the eMotorWerks-1 prototype appeared on the Genentech campus, at a prime location - the intersection of the HQ buildings 31, 32, and 33. People started gathering around the car right away, at least 30 minutes before scheduled time, asking questions and waiting for the presentation to begin. A few hundred spectators stopped by during lunch and at least a few dozen stayed for more than half an hour.

These two appearances (Yahoo on Dec 8 and this appearance at Genentech) were also profiled in yet another National publication of Electric Automotive Association - along with a 3-page report on our industry-leading 10kW EV charging system.