How Can You Reduce Your Carbon Footprint? 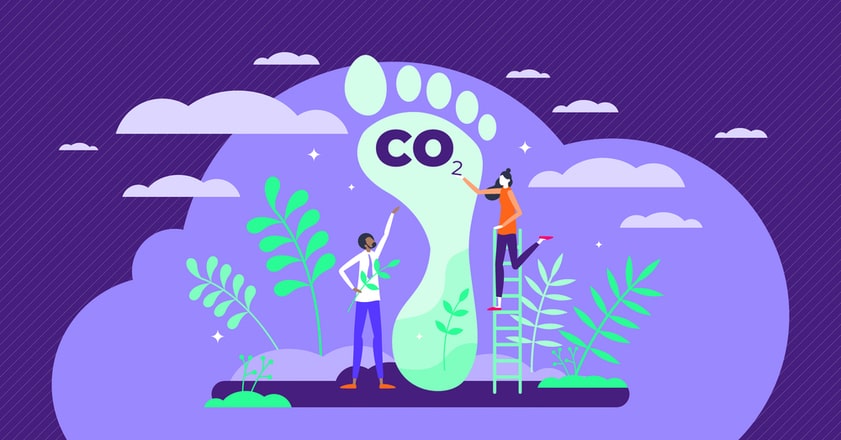 Climate scientists’ reports about 2020 carbon emissions numbers are sobering. An analysis of global temperatures by the NASA Goddard Institute for Space Studies shows that 2020 was the warmest year on record. That’s despite the cooling effect of last year’s La Niña event. The previous six years are all among the hottest ever.

It’s a wake-up call. There’s no doubt that political and business leaders need to institute smart and aggressive climate policies. But at the same time, we can each take steps to reduce our carbon footprint. Even small changes can add up to a big impact. This article will explain what a carbon footprint is and how it is calculated. It also offers four key ways to reduce your carbon footprint.

What is a carbon footprint?

Your carbon footprint is the total amount of carbon dioxide and other greenhouse gases generated by your existence. Carbon footprints are measured by the ton. According to The Nature Conservancy, which offers a carbon footprint calculator, the average carbon footprint for a person in the U.S. is a whopping 16 tons per year. The non-profit states that everyone would need to reduce their footprint down to 2 tons by 2050 to avoid a catastrophic 2-degree Celsius rise in global temperature.

For the average individual, that means reducing your carbon footprint by nearly 90%! That’s a steep order, but if you know which aspects of your lifestyle have the most environmental impact, you can take meaningful steps towards that reduction target.

One of the most impactful areas to focus on is transportation. That’s because, in America, transportation accounts for the largest share of greenhouse gas emissions, representing 28% of total emissions. Passenger vehicles—our cars, S.U.V.s, and trucks—produce the highest portion (59%) of those transit-related carbon emissions.

Even a moderately efficient 25-mpg car represents more than 4 tons of emissions per year—based on average annual driving in the U.S. Drivers can slice off about 2 tons of climate emissions by cutting in half the miles driven in a year. You can achieve that by replacing car-trips with walking, biking, or taking public transit. Technology, such as vehicle electrification, is also a part of the solution.

Let’s take a look at the four top ways to reduce your carbon footprint, without sacrificing the conveniences of a modern lifestyle.

On average, electric vehicles are about four times more efficient than gas-powered cars. What would switching to electric mean for your carbon footprint?

• A Tesla Model 3 produces 0 direct emissions from the tailpipe for those same miles.

There’s a myth that all-electric vehicles are too expensive. The venerable Consumer Reports magazine published a 2020 study finding that EVs cost between $6,000 to $10,000 less than internal-combustion vehicles over the lifetime of use. Upfront purchase prices are reduced by EV and EVSE rebates worth between a couple hundred and as much as $7,500 the federal EV tax credit depending on the vehicle make and model.

Try Enel X’s EVSE incentive tool for the specific rebates available to you based on your region.

According to the National Renewable Energy Laboratory, home rooftop solar could generate enough power to offset 39% of America’s electricity needs. Now consider research published in Nature Energy showing that solar’s carbon footprint is many times lower than coal. That’s the case even after considering emissions during solar panels’ production.

The considerable savings in CO2 emissions start to add up when you consider that U.S. residential utility customers, on average, consume more than 10,000 kilowatt-hours of electricity. Every single kilowatt-hour represents nearly one pound of CO2 emissions, according to the U.S. Energy Information Administration.

Alternatively, if you can’t install solar at home, you can still match the electricity used to charge your electric car with renewable energy. JuiceEco, a clean energy solution from Enel X, enables EV owners to purchase Renewable Energy Credits (RECs). This is an easy and affordable way to make up for the energy used for vehicle charging and lower your carbon footprint even more.

The environmental benefits of home solar are more pronounced for EV drivers, who are not only displacing utility-generated electricity but also CO2 emitted from their car’s tailpipe. If home solar is sized sufficiently to power your electric vehicle, your driving immediately becomes zero emissions.

Electricity represents 27% of America’s greenhouse gas emissions. That’s a close second to transportation. Thankfully, a host of energy efficient appliances can help reduce your home’s carbon footprint. Start by switching to LED lights. According to the U.S. Department of Energy, residential LEDs use at least 75% less energy and last 25 times longer than incandescent lighting. The DOE estimates that widespread use of LED lighting by 2027 could save the equivalent output of 44 large electric power plants.

Other smart home devices also provide automation features to reduce carbon emissions. Smart light switches automatically turn off at a set hour. A connected thermostat provides only the heat or AC needed for comfort. Sensors and data learn your lifestyle patterns and habits for maximum energy efficiency. When combined with high-performance insulated windows and air-tight enclosures, natural warmth can be captured and maintained.

For EV owners, a charging station effectively becomes the home’s largest electric appliance. Leveraging the time-of-use scheduling feature, the JuiceBox smart EV home charging station can easily be configured to automatically charge at the times when energy is cleanest and most affordable.

4. Shop with a conscience

While transportation and electricity represent significant opportunities to reduce your carbon footprint, we can do more. The tried-and-true three Rs are still compelling: reduce, re-use, and recycle.

The Natural Resources Defense Council reports that the average American generates about 4.5 pounds of trash every day. Every item we buy has a supply chain—a trail of extraction, production, and distribution that requires energy consumption and carbon output. To reduce those impacts, the NRDC. recommends adopting a total-lifecycle mindset and buying well-made, long-lasting products and borrowing items that you rarely use.

Do individual choices make a difference?

Smart public climate policy is a must. But our consumer decisions—whether it’s switching to an electric vehicle or reducing single-use plastic—also adds up.

Using an online carbon-footprint calculator can be an eye-opening experience. The good news is that there are personal changes that can make a difference without breaking the budget or giving up the conveniences of the modern world.

All these decisions have ripple effects. Start with low-hanging fruit, those changes that are easiest for you personally to make. Then take some bigger steps that will have the largest environmental impact, such as switching to an electric car or installing solar panels.

We can learn a lot from others who are leading the way. Find out how the LeBlanc family in New Brunswick, Canada reduced their carbon footprint with smart home features, including smart EV charging.