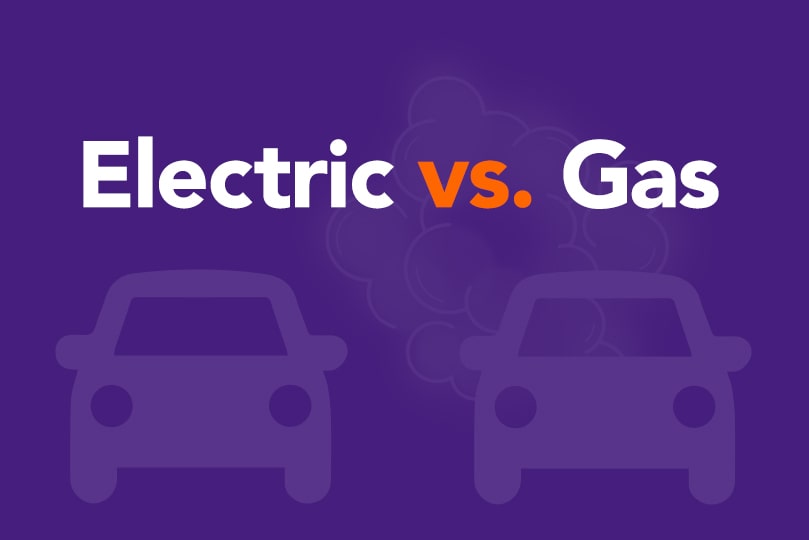 One of the most significant driving factors when choosing between a car that runs on gas or electricity is cost. Cost has a multitude of variables ranging in scope from fuel charges to maintenance fees, to the overall price of the vehicle itself. One of the biggest arguments made against electric cars is that they are too expensive upfront and this is simply not true today as more than forty different models have come to market.

The dramatic rise in electric cars over the past decade proves just how cost-effective electric vehicles are. Not only can you have a home charging station for your EV that’s convenient and efficient, but you also will pay significantly less in “fuel” prices compared to traditional gas cars.

This is just one of the many benefits of driving an electric vehicle. Going beyond the environmental benefits of reducing transportation emissions through EVs, electric cars cost a fraction of what gas vehicles do.

To understand how and why the cost of an electric vehicle is so much different than that of a gas-powered car, we will examine the total cost of ownership as it pertains to things like fuel, maintenance, and supplementary cost.

When looking into buying a new car, budget does the bulk of the work to determine our options. Whether you are looking at a new or used vehicle, or gas versus electric, sale price is usually dependent on your location, the brand of the car and the type of vehicle.

For this comparison, we will use the example of a four-door sedan. According to Kelly Blue Book, the average cost of a gasoline-powered four-door sedan is $35,000.

Assuming you pay cash and do not finance the vehicle, this sticker price will come with some pretty hefty taxes attached to it.

For example, the Kia Soul, Nissan Leaf, and Chevy Bolt are all priced below $35,000, which beats the initial transaction cost of the average gas-powered vehicle.

Electric cars have a significant advantage in regards to cost due to impressive federal and state EV incentives. We strongly recommend looking into your state’s electric car tax credits as the tax incentives can drastically lower the cost of electric cars.

If electric vehicles are cheaper, then why have I been told they are more expensive? There is still a great deal of lingering misunderstanding when it comes to the initial cost and total cost of purchasing and owning an electric vehicle today, even though the market has been evolving at a rapid clip and introducing more affordable electric cars year over year.

One of the reasons for the misconceptions about electric vehicle pricing has to do with the types of electric vehicles first available. In 2008, Tesla introduced the Roadster, a sports car, as its first go-to-market electric car, and thus the automotive brand is associated with luxury.

Since then, Tesla has ramped volume production, introduced more models, including the Model 3, and established global supply chains to continue to bring down costs.

Furthermore, when it comes to both gas-powered cars and battery-electric cars, we tend to classify the vehicles by make, model, and brand. However, electric vehicles also have additional classifications, which also influence the perceptions around electric cars.
Specifically, there are three different types of electric vehicles, all of which range in pricing options, brand, and style. It’s important to understand the type of electric vehicle as this relates to the lifetime ownership costs, given different fueling and maintenance costs across the three categories.

A car that is solely powered by electricity and does not rely on gasoline in any capacity is how electric cars work. Some examples of BEV’s include:

Plug-in Hybrid Electric Vehicles (PHEVs)
These are the most common types of an electric vehicle. Both plug-in hybrid and battery-electric vehicles come equipped with regenerative braking, which recaptures the energy when braking or decelerating, which would otherwise be lost in a traditional gasoline car.

Hybrid Electric Vehicles (HEVs)
Became popularized by Toyota when the company released the Prius Hybrid. All plug-in electric cars are hybrids, but not all hybrids are PHEVs. Hybrid Vehicle are vehicles that rely primarily on gas, but do contain some electric components like regenerative braking.

Examples of hybrid vehicle that do not use a plug to charge, but contain hybrid elements, are cars like the Toyota Camry and the Honda Civic. Both the Camry and the Civic are available as standard gas and hybrid options.

The national average cost of a gallon of gas in June of 2019 was $2.81. Comparatively, the average cost per kWh was 14 cents. You are probably familiar with the term miles per gallon, especially as it relates to the cost of fueling a gasoline vehicle.

MPG is the metric that tells car owners how far their car will take them on a full tank of gas. Electric vehicles have a similar metric called kilowatts per hour per 100 miles. These two formulas allow us to directly compare the price of gas for a traditional gas-powered car to the Tesla supercharger cost for an electric vehicle.

A standard gas vehicle holds an average of 14 gallons, meaning the average tank of gas costs drivers $39.34. Alternately, the standard electric vehicle is considered to have a full charge at 50 kWh, roughly taking 7.2 kWh/hour to charge. Kilowatts, the unit of measurement which describes electric energy, is offered to consumers at a national average price of $0.14 per hour.

This means that per hour, the average electric vehicle only uses $0.98, making the cost of a full charge $6.86, much more appealing than a gas car’s fuel cost!

It is important to note that pricing for power varies depending on your utility company and how they charge for power. For example, some utility companies charge higher Time-Of-Use (TOU) rates for things like "peak hour usage," where the price of power is higher between 4 pm and 9 pm.

Luckily, with JuiceNet Green, EV drivers don’t have to worry about when they plug in to charge, because the EVSE software optimizes the cleanest and most affordable charge available.

One of the added benefits of an electric vehicle is significantly lower maintenance costs. The car’s use of electric power means that there is no internal combustion which leads to less corrosion.

The engine of an electric vehicle also has less moving parts like fan belts, spark plugs, etc. which saves you money on replacement parts and service costs. The average yearly savings in maintenance for an electric vehicle owner is approximately $800 a year.

Whether it is gas or electric, cars have hidden costs. While we know electric cars don’t require much in the way of maintenance, there are still different hidden costs associated with electric cars.

Many auto manufacturers have EV battery pack warranties for as long as 8 to 10 years and 100,000 to 150,000 miles, which typically cover the average lifetime usage of the first owner, but if you expect to exceed those limits, you can learn how to increase your electric car battery life.

For perspective, replacing a Nissan LEAF battery (model years: 2011 to 2015) can cost you $5,499, in addition to installation, however most electric vehicles have outstanding warranties so that if your lithium ion battery does prove to be defective, the cost of replacement doesn’t fall on the shoulders of the car owner. You can even skip on Tesla battery cost when you take advantage of their 8-year battery warranty.

For most drivers who make the switch to electric vehicles from a gas powered car or a hybrid electric vehicle, they find that charging at home is actually more convenient than visiting a gas station, saving time and money. Also, workplace and public charging stations for electric cars are also becoming more prevalent, especially as more electric vehicles are hitting the road.

What about the cost of installing a charging system for my new EV?

Like any new or used conventional car you buy, there is a larger upfront cost for this asset. However, battery electric cars are more cost-effective to operate over the lifetime of the vehicle, which is related to fueling and maintenance costs over the average 12 year vehicle lifetime.

That said, the purchase and installation of a networked Level 2 home charging station is also an upfront cost, unless you sign up for JuicePlan, which comes with quick installation by a certified professional as part of the package.

For many battery electric vehicle owners, a charging station consists of a special adapter that allows your car to charge off the standard 120v current running through your house. This is the same power that turns on your lights and powers your home, but now it also powers your car by employing an EV charger.

While the initial cost of setting up and installing a charging system in your home may seem expensive, remember that the average cost of a mid-tier PHEV is about $4,000 less than that of a similar gas-powered sedan.

The average cost for an EV home charging system ranges between $500-$900, depending on the amperage and features and between $500-$2000 for the EV charger installation depending on your home’s electrical system. This nets out to an average of $2000 in additional cost, but two significant financial factors offset this cost.

Incentives For Driving an Electric Vehicle

First, there are federal incentives, which give tax breaks to electric vehicle buyers. According to the IRS, each new electric vehicle purchased comes with a minimum $2,500 tax credit, and could be as hefty as $7,500 depending on the car!

Even the smallest possible tax credit offered by the IRS pays for your new charging system, and the installation, with funds leftover! Second, the average savings in fuel and maintenance by switching to an electric vehicle is an average of $5,000/year.

When compared to the initial transaction cost of a gas-powered vehicle, where there are no savings associated with a new purchase, an electric vehicle is a no brainer.

The bottom line is that an electric vehicle will save you money. Depending on the vehicle, EV owners who switch from gas to electric see savings within the first six months of ownership.

Even with additional upfront costs like the need to buy and install a charging system, electric vehicles are proven to be the better financial decision.

Multiple purchases may seem daunting, but the cost analysis proves that the benefits of an electric vehicle are better for your finances and the wealth of our natural resources.