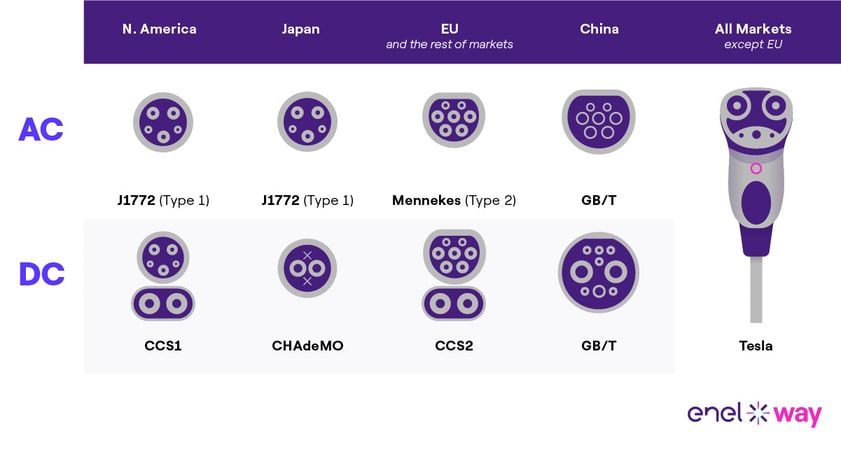 There are many reasons to consider switching from a gasoline-powered car, to one that’s powered by electricity. Electric vehicles are quieter, cost less to operate and produce far fewer total emissions well to wheel. However, not all electric cars and plugs are created equal. In particular, the EV charging connector or plug type standard varies across geographies and models. While there is contention around universal plug technology, there is critical mass from global automakers supporting the Combined Charging System (CCS) in North America and Europe, while Japan and its automakers use CHAdeMO, and China, which has the world’s largest electric vehicle market uses GB/T.

Also, depending on the plug type within each region, there are different levels of power available. We will zero in on all these differences and other relevant information regarding charging electric vehicles below.

That’s important to know because every non-Tesla level 1 or level 2 charging station sold in North America utilizes the J1772 connector. For example, all of our JuiceBox products use the standard J1772 connector. However, Tesla vehicles can charge on any JuiceBox charging station, by using the adapter cable that Tesla includes with the car. Tesla makes their own charging stations, that use a proprietary Tesla connector, and EVs from other brands cannot use them unless they purchase an adapter.

It’s a little more complicated for DC fast charging, which is high-speed EV charging that is only available in public areas, most frequently along major freeways where long-distance travel is common. DC fast chargers aren’t available for at home charging, as the electricity requirements are usually not available in residential buildings. Also, it’s not recommended to use DC fast charging stations more than once or twice a week, because the high rate of recharging can adversely affect the lifespan of an electric car’s battery if done too often.

DC fast chargers use 480 volts and can recharge an electric vehicle faster than your standard charging unit, in as little as 20 minutes, thus allowing for convenient long-distance EV travel, without the concern of running out of juice. Unfortunately, instead of only two different connectors, as used in level 1 and level 2 charging (J1772 and Tesla), DC Fast Chargers use three different types of connectors.

In Europe, EV charging connector types are similar to North America, but there are a few differences. First, the standard household electricity is 230 volts, nearly twice the voltage as what is used in North America. For this reason, there’s no “level 1” charging in Europe. Secondly, instead of the J1772 connector, the standard used by all manufacturers except Tesla in Europe is the IEC 62196 Type 2 connector, commonly referred to as mennekes.

DC fast charging in Europe is also the same as in North America, where CCS is the standard used by virtually all manufacturers, except Nissan, Mitsubishi. The CCS system in Europe combines the Type 2 connector with the tow dc fast charge pins the same way it does in North America with the J1772 connector, so while it’s also called CCS, it’s a slightly different connector. The Tesla Model 3 now uses the European CCS charging system in Europe, and Tesla has outfitted their Supercharger stations to also have a CCS connector.

How do I know which connector my electric vehicle uses?

While it may seem like a lot to learn, it’s really pretty simple. For level 1 and level 2 charging, all electric cars use the connector that is the standard in their respective markets, North America, Europe, China, Japan, etc. The sole exception being Tesla, but all of its cars come with an adapter cable to power with the market standard. Non-Tesla electric vehicles can also use Tesla Level 1 or 2 charging stations but they need to use an adapter which can be purchased from a third party vendor.

For DC fast charging, Tesla has a proprietary network of Supercharger stations that only Tesla vehicles can use, no adapter will work on these stations because there’s an authentication process. Nissan and Mitsubishi cars use the Japanese standard CHAdeMO, and virtually every other electric vehicle uses the CCS charging standard.

There are smartphone apps like JuiceNet software, that list all of the publicly available EV charging stations, and specify the plug type or connector.

If you are interested in electric car charging at home and are concerned with different EV charging connector types, there’s no need to fret. Every charging unit  in your respective market will come with the industry standard connector that your EV uses. In North America that will be the J1772, and in Europe it’s the Type 2. If you have any questions, please feel free to contact our customer support team, they’ll be happy to answer any electric vehicle charging questions you may have.