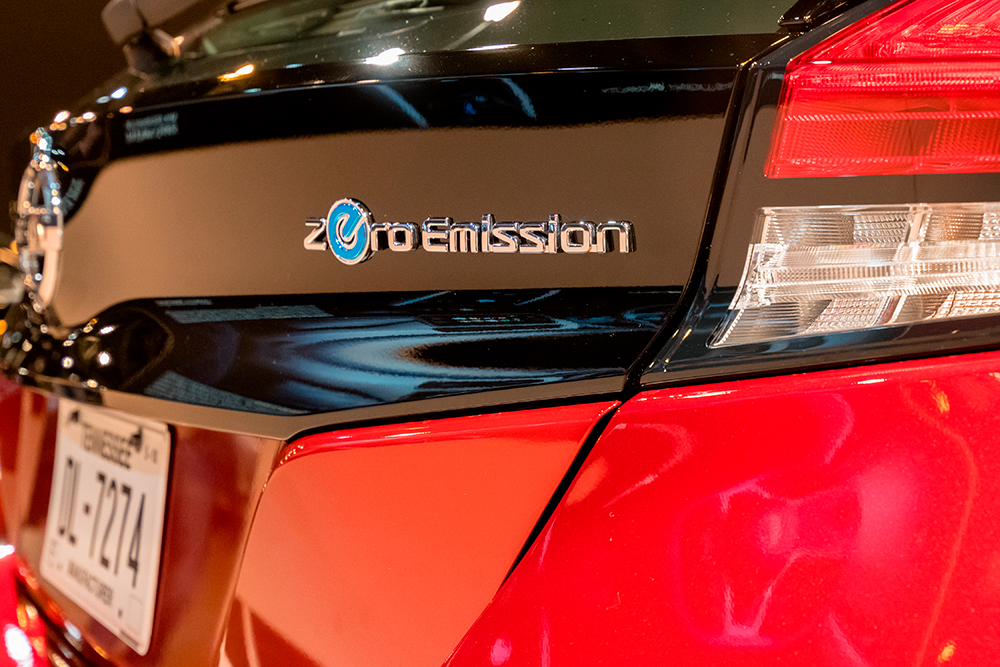 Electric vehicle naysayers love to point out that EVs are powered by fossil-fuel powered plants in many places, and while this is true, the fact remains that electric vehicles still produce far fewer greenhouse gas (GHG) emissions well-to-wheel than gas-powered vehicles. According to Bloomberg New Energy Finance (BNEF), electric car emissions are 40% lower than gasoline cars and analysts expect the difference to grow as clean energy expands globally. The transportation sector is one of the largest contributors to national (GHG) emissions accounting for 1.9 billion tons of CO2 annually and more than 25% of total emissions in the US. Over half of the transportation emissions are comprised of passenger cars, trucks and vans.

In order to effectively gauge a vehicle’s environmental footprint, it is important to consider the greenhouse gas emissions emitted over the cars total lifespan. Manufacturing vehicles is resource-intensive in both cases. For electric vehicles, the production of lithium-ion batteries is one of the most energy and material-intensive aspects, with the overall manufacturing process for an electric vehicle creating roughly 15% more emissions than the production of a gasoline-powered vehicle. That said, EV critics like to exaggerate this isolated fact while overlooking the total emissions of a vehicle across its operational life.

According to the Union of Concerned Scientists, battery electric vehicles begin compensating for the additional manufacturing emissions as soon as they hit the road, offsetting initial emissions within a matter of months. In contrast, traditional gas-powered vehicles rapidly offset their ‘clean’ manufacturing processes and continue to emit significantly more greenhouse gas emissions over a vehicle’s entire operational lifespan. In part, this is because electric power vehicles have zero tailpipe emissions, whereas conventional, gas and diesel-powered vehicles do. On average, an electric drivetrain is 80% more efficient than a conventional drivetrain with an internal combustion engine. Because electric drivetrains are extremely efficient and have no tailpipe vehicle emissions, EVs have a huge advantage in terms of reducing local air pollution. As a result of the net positive environmental and public health benefits, dozens of cities across the world have begun to ban diesel car emissions in recent years.

Continuing improvements in automotive technology and fuel efficiency are helping to curb transportation-based emissions, however, in 2017 the transportation sector passed the electricity generation sector becoming the number one source of GHG emissions in the US. This shift is largely due to the integration of renewable energy and cleaner fuel sources into electricity generation across the country. The continued development of fuel-efficient and hybrid vehicles indicate transportation emissions will also decline in the future, however, tailpipe emissions from internal combustion engine (ICE) cars will continue to produce destructive exhaust, contributing to poor local air quality. Minimizing overall transportation emissions will accordingly include the widespread adoption of zero-emission vehicles, primarily in the form of battery-electric vehicles (BEVs).

In contrast to traditional ICE vehicles, electric vehicles do not produce greenhouse gas laden exhaust emissions. Further, zero-emission vehicles do not emit non-GHG air pollutants that are linked to numerous public health risks. According to a study conducted by the Vehicle Technologies Office of the US Department of Energy, the national average of CO2-equivalent emissions for a typical EV per year is 4,815 pounds as compared to the average gasoline-powered car which produces 11,435 pounds of CO2-equivalent emissions annually.

EV skeptics are quick to point out that ‘zero-emission’ electric vehicles still require a significant amount of electricity for daily charging that produces indirect emissions, a significant factor in more overarching ‘wheel-to-well’ analysis of EV emissions. Indirect emissions are the emissions produced in the burning of fossil fuels at power plants to produce electricity for residential and commercial uses. The indirect vehicle emissions of charging your electric vehicle are highly dependent on energy mix, or the methods of energy generation used by regional utilities. While this may create some variability in charging based emissions, the broad fact stands that for all Americans charging the average new EV produces far fewer global warming pollutants than driving the average new gasoline car.

According to a two year study conducted by the Union of Concerned Scientists, an average EV produces the same greenhouse-gas emissions as a car getting 80 miles per gallon, and in regions with particularly clean energy mixes, this number can exceed 110 miles per gallon. The emissions gap between EVs and conventional cars is further supported by the fact that existing EVs can get cleaner—and, over time, they are getting cleaner. While burning gasoline will always release harmful GHGs and air pollutants, electricity is trending cleaner over time as we shift away from coal and add more renewables. You can check your local emissions figures with UCS’s online emissions calculator.

Charging emissions are also dependent on the time of day your electric vehicle is charging. During evening peak hours, energy generators rely on more fossil fuels and natural gas to meet the high demand with peaker plants. Fluctuations in renewable energy can be offset through smart, managed EV fleet charging that allows EVs to soak up excess renewable energy at cheap charging rates when solar or wind electricity is plentiful. 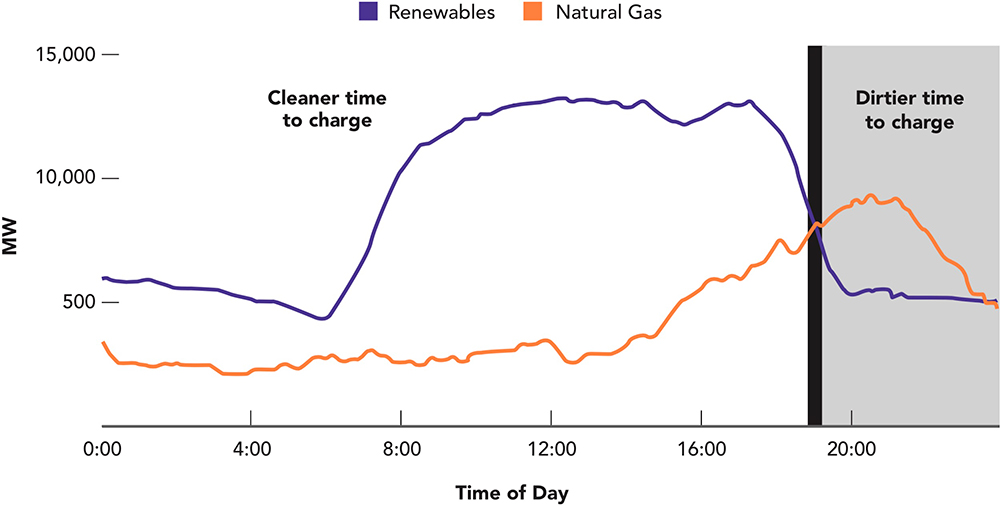 Over half of all electric vehicle sales in the U.S. are in California, which continues to increase its supply of solar and wind to meet electricity demand. According to CAISO, California is already getting 30% of its power from renewables. California, the world's fifth largest economy, is incorporating more renewable power every month as technology and accessibility continue to improve. California’s dedication to renewable energy has the potential to almost entirely eliminate indirect charging emissions produced during electricity generation.

California has ambitious legislative plans and goals aimed at reducing and ultimately eliminating transportation-based emissions entirely. California bill AB 40 aims for 100% adoption of “zero-emission vehicles” by 2040. Transportation is the largest source of GHG emissions in the state, accounting for roughly 40% of overall state emissions. In conjunction with the state’s increasing renewable energy utilization, California will be a leading example for the future of clean transportation.

Our JuiceBox smart chargers and patented JuiceNet Green software help mitigate indirect emissions, issues of ‘dirty charging’ while meeting all the demands of charging your electric vehicle. Our Wifi-enabled JuiceBox units allow you to set your charging schedule through our smartphone app and online dashboard while our industry-leading software takes care of the rest. JuiceNet’s predictive analytics engine schedules the charging between the time the EV was plugged in and when the car is expected to be needed next in order to minimize CO2 emissions.

No matter what type of electric vehicle you drive, JuiceNet has something for you. Our JuiceNet Green software estimates how much CO2 will be emitted on a per-kWh or per-mile- of-range basis, accounting for which power plants will provide electricity for charging your EV. Charging will be maximized when renewable energy sources are most productive and the energy mix is cleanest, ensuring the lowest possible carbon footprint while assuring you wake up to a fully charged battery in the morning.

Overall, electric vehicles are cleaner well-to-wheel compared to their gas-powered counterparts today, even in places that rely heavily on fossil-fuel power plants. There is a massive shift to decarbonize both electricity generation and transportation sectors, and electric vehicles will become increasingly cleaner as more states integrate more renewable energy into their energy supply mix. If you are looking to improve your vehicle’s fuel economy and reduce your carbon dioxide emissions, then it’s time to switch over to an all-electric vehicle.

For more electric vehicle info, visit our website or call the experts at Enel X today.