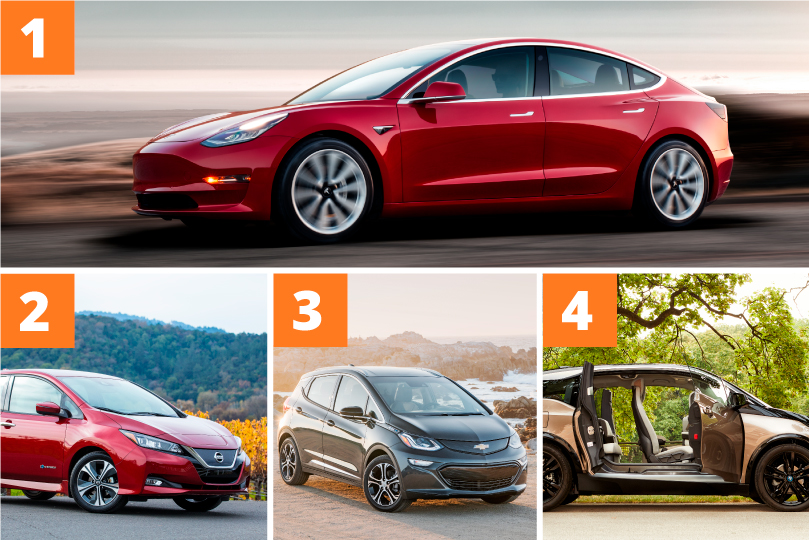 Electric cars are really beginning to gain momentum. More people are considering a plug in vehicle to replace their combustion-engine car as range has increased year over year and prices have come down. While there are several benefits of electric cars, dropping prices make owning an electric car even more popular today. With a variety of models available, electric vehicles are finally going mainstream. In fact, more than two million electric vehicles were sold worldwide in 2018, according to InsideEVs electric vehicle sales scorecard.

All drivers have their own needs and desires for a car, so there’s no “one size fits all” answer to what electric car is the best for you. However, what we can do, is look at what were the most popular battery-powered cars in 2018, and from that you may be able to decide which electric car is best for you. 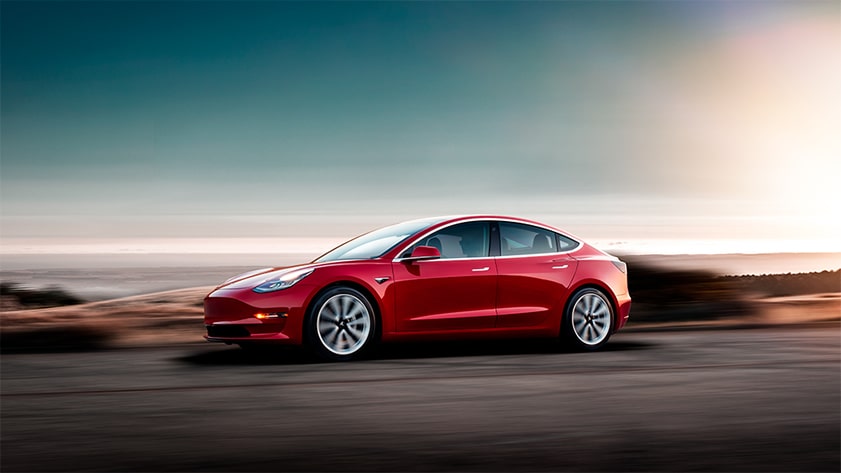 Tesla was by far the most popular electric vehicle brand in 2018, selling over 245,000 electric cars. Tesla is known for great looking, long range, sporty battery-powered cars that offer a premium electric driving experience. Tesla has three offerings; the Model S, the Model X and the Model 3.

The Tesla Model S is an all-wheel-drive, large luxury sedan with a base price of $75,000 and a driving range of 285 miles. There are more expensive versions of the Model S that have a longer range, more power and additional options which can drive the price up to $130,000.

The Tesla Model X is an all-wheel-drive midsize sports utility vehicle with a base price of $81,000 and a driving range of 255 miles. The Model X is known for its distinctive “falcon-wing” rear doors that open up and over the top of the vehicle. Owners can add a larger battery pack to increase the driving range to 305 miles and other options that can boost the Model X’s price all the way up to $142,000.

The Tesla Model 3 is Tesla’s least expensive and top selling electric car. With a base price of $35,000, it has rear-wheel drive and offers a driving range of 220 miles. The Model 3 is also offered in all-wheel drive form and with a larger battery that can deliver 310 miles of driving range. It’s also available in a Performance version for those looking for a track-ready electric car that they can use as a daily driver. Loading your Model 3 up with all of the options Tesla offers will set you back $68,900 for the top-spec Model 3.

The Tesla Model S and Model X both charge at a rate of up to 48 amps (11.5 kW) on level 2, 240 volt charging stations. The base Model 3 will charge at 32-amps, (7.7 kW) and the long range version will accept 48 amps, like the Models S and X. The JuiceBox Pro 40 would be a good fit for any Tesla owner. For those who want the charge at the full 48 amps their Tesla can accept, we’d recommend the JuiceBox Pro 75. For the best Tesla charging stations, EV drivers can earn rewards and optimize charging with JuiceNet Green. 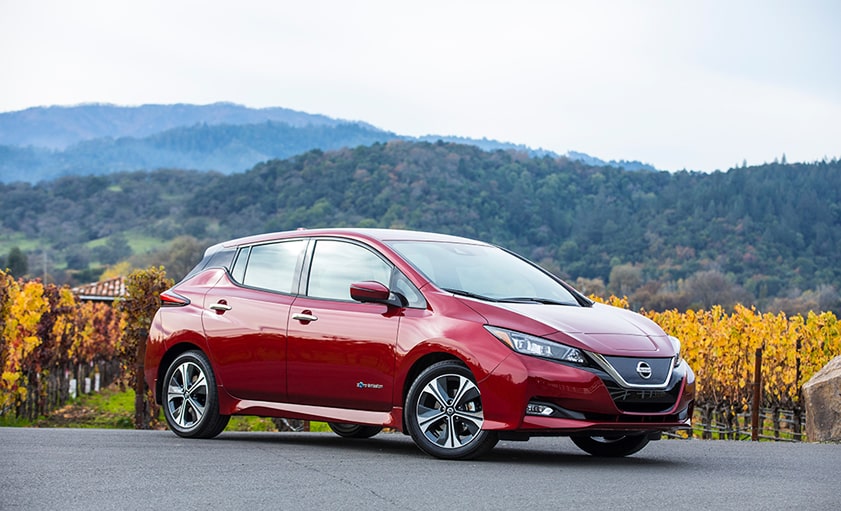 The Nissan LEAF is in its ninth year of production and is the best-selling electric car worldwide, having recently surpassed 400,000 units sold. LEAF stands for “Leading, Environmentally Friendly, Affordable Family Vehicle,” which accurately describes the EV. The LEAF is in fact, leading the industry in EV sales, it’s environmentally friendly because it has zero tailpipe emissions, and perhaps most importantly, it has been and likely will continue to be an affordable family vehicle.

With a starting price of $29,990, the front wheel drive LEAF is a five-passenger hatchback that’s a great family-hauler. It’s one of the most affordable electric vehicles on the market today and has a driving range of 151 miles per charge. For those that need more range, the Nissan LEAF e-Plus offers 226 miles of range and costs $36,550.

The LEAF will accept 27.5 amps and charge at 6.6 kW. The JuiceBox Pro 32 would be an excellent choice for the Nissan LEAF, as it will deliver 32 amps. You may also consider the JuiceBox Pro 40, so you have some extra power in case your next EV can charge at a higher rate. Click here to learn about Nissan LEAF charge times. 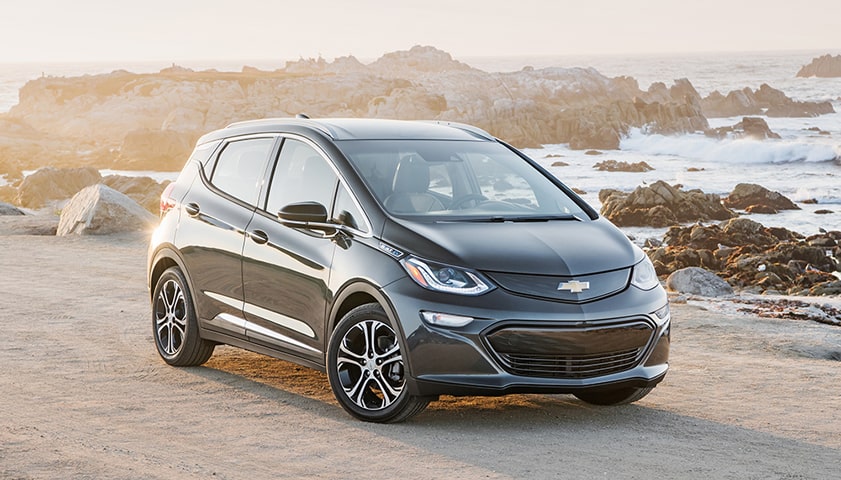 The Chevy Bolt EV was introduced in 2017 and has since sold about 50,000 vehicles. When the Bolt EV was first available, it was the first 200-mile plus electric vehicle that cost under $40,000. With a 238 mile range, and a starting price of $37,495 for the base LT version, the Bolt EV offers a lot of range and utility.

It’s a five-passenger, front wheel drive hatchback, that’s smaller than the Nissan LEAF, and also has a little more pep. Some Bolt EV owners have reported getting 300 miles per charge when driving the car gently, so the Bolt EV is a great long range EV, for a relatively affordable price.

If you want to step up to a more well equipped version, the Bolt Premier is available for a starting MSRP of $41,895. The Bolt Premier comes with upgraded wheels, leather interior, a full suite of electronic safety alerts among other upgrades.

The Bolt EV will accept 32 amps and charge at 7.7 kW, making the JuiceBox Pro 32 or JuiceBox Pro 40 the perfect Chevy Bolt chargers.

The Chevy Volt is a plug in hybrid electric vehicle that can go 53 miles on electricity alone before the gasoline range extender turns on to allow the car to travel another 367 miles before needing to refuel or recharge the batteries. This gives the Chevy Volt a total driving range of 420 miles.

The Chevy Volt is a front wheel drive five-passenger hatchback and has a starting MSRP of $33,520. Unfortunately, Chevrolet decided to discontinue the Volt in April of 2019, despite selling more than 200,000 Volts (including the Volt’s European version the Ampera) worldwide since 2011.

The 2019 Volts were able to charge at 30 amps, (7.2kW) while previous model years could accept a maximum of 15 amps (3.6 kW). Looking for a Chevy Volt charger? The JuiceBox Pro 32 would be an excellent choice for any model year Chevy Volt, as it will deliver 32 amps, which is more than enough power. You may also consider the JuiceBox Pro 40, so you have some extra power, in case your future EV can accept a higher charge rate. 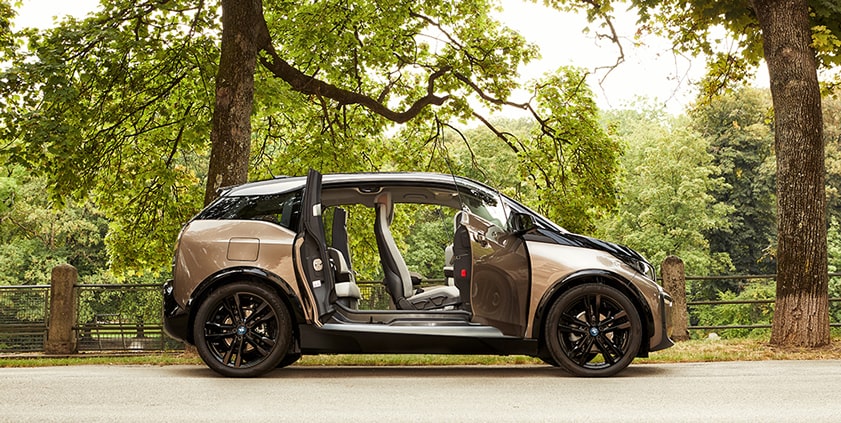 The BMW i3 is currently BMW’s only battery electric vehicle (BEV) offering. It does however, also come in plug in hybrid (PHEV) form, with the addition of the range extender option that BMW calls the REx. The BMW i3 is the only electric car in the world that you can buy in both BEV and PHEV form.

BMW has sold over 150,000 i3s since they were first introduced in late 2013 as a 2014 model. The 2019 i3 received a battery pack upgrade, and the BEV i3 can now go 153 miles on a single charge. The PHEV version REx, can travel 126 miles on its battery before the gasoline range extender turns. The i3 is a four passenger hatchback that has rear coach doors. The coach doors can make entering and exiting the vehicle difficult in tight parking spaces, especially when using child seats for smaller children.

BMWs other electric offering is the plug in hybrid version of their popular 5-Series midsize sedan, the 530e. The 530e can go 15 miles on electric power, and has been a very popular plug in hybrid, selling over 40,000 units worldwide in 2018. Other than having an electric powertrain to assist the combustion engine, the 530e is basically the same feature-packed luxury five passenger sports sedan as the gasoline version.

With over two million electric cars sold in 2018, it’s clear electric car adoption is on the rise. Will you join the electric revolution in 2019? We hope so, and we hope our guide to the best electric cars in 2018 will help you decide which electric car is the best one for you. Whichever type of electric car you choose, we have a JuiceBox smart charger that will fit your charging needs perfectly.

For more electric car information, check out our website or call our experts at eMotorWerks today.