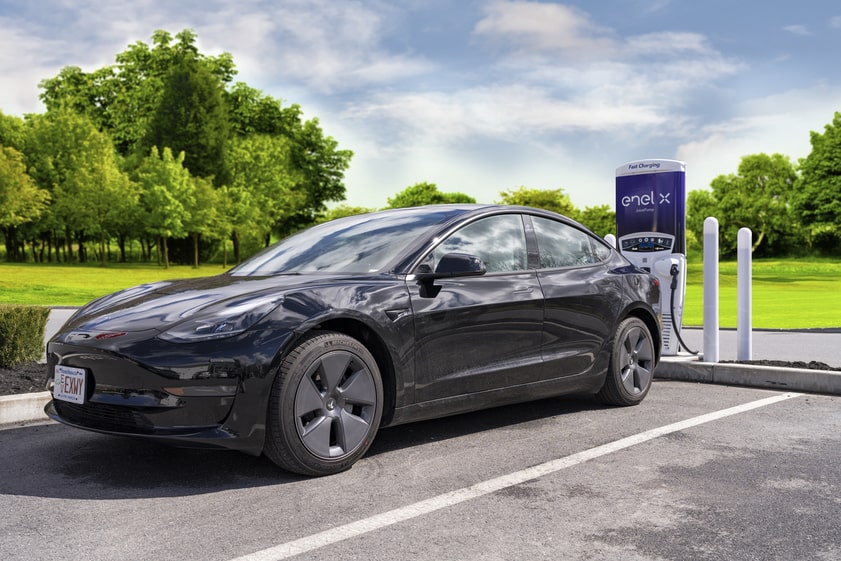 Battery electric cars have only been around for about a decade, but in the last several years one electric car has broken the mold. The Tesla, in all its shapes, sizes, and configurations, stands above the fold as the epitome of an all-electric vehicle. Depending on the model, Teslas boast an average of 400 horsepower and zero to sixty acceleration time of three seconds or less.

This electric vehicle, engineered for driver ease of use and passenger comfort, is becoming a new favorite amongst car enthusiasts. Still, new consumers that are considering going electric want to know: How do electric cars work? How do you charge a Tesla at home? How long does it take to charge a Tesla? How long does the battery last? How often do you need to charge it? How much does Tesla supercharger cost?

Before we get started, it’s important to clarify that there are two different answers to the question, “How many miles does a Tesla last?”

For those looking to see how many miles a Tesla can drive on a full charge, we recommend reading our post: How Long Does It Take to Charge a Tesla?

There, you will see models broken out by their charge times, and the expected EV mileage or range. The other answer, or what we aim to discuss here, is focused on Tesla'/ca/en/s battery degradation over time and mileage before a Tesla charger and battery replacement is needed.

The degradation of the Tesla battery does not happen all at once. Unlike the battery in your gas-powered car, the battery in an electric car doesn'/ca/en/t die if you accidentally leave the lights on in the cabin.

This is a huge plus if you are somewhere that you don'/ca/en/t know where to charge your electric car. The lithium ion battery in an electric car is nothing like the lead acid battery in your gas-powered car.

Tesla vehicles are designed and manufactured for durability with the understanding that the batteries are the most expensive car component, so Tesla designed its battery capacity to endure exceptional conditions.

According to a private study on the longevity of Tesla batteries, the researchers found that the Tesla car battery should have no issue reaching the 500,000-mile mark. Clearly, drivers who are asking, “How many miles does a Tesla last?” really have very little to worry about.

Now, this staggering number does come with a few caveats. The first is that over time, the Tesla car battery does begin to wear down and lose charge like all other batteries.

Again, the degradation of a Tesla vehicle'/ca/en/s battery life does not happen all at once but rather very subtly, and in increments that would be nearly impossible for a driver to notice on a day to day basis.

The more interesting statistic comes from older Teslas. Those same cars that saw only a five percent loss in battery efficiency after the first 50,000 miles saw their battery decrease only another 5 percent in the next 100,000 miles.

Most Tesla owners with cars that past an odometer reading of higher than 150,000 miles report that their Tesla still operates with 90 percent efficiency when it comes to the battery. Based on these metrics, the company can postulate that a Tesla with 500,000 miles on it would still be able to operate at a minimum of 80 percent efficiency.

These numbers seem to point to the conclusion that Tesla vehicle batteries, while degrading over time, do so less drastically and at a slower pace than every other electric car battery. The Tesla battery, while it may lose power, does so in a way that drivers remain virtually unaffected.
The impressive thing about a Tesla comes from the evidence above wherein the older the car gets, the slower and more gradual the process of battery degradation becomes. It is for this reason that Tesla makers and owners believe that in some instances, their car could actually outlast them.

Pay for the battery replacement yourself

Use the Tesla Warranty

The second option for replacing a battery in a Tesla is to have it covered by warranty. You may have heard of Tesla'/ca/en/s warranty guarantees "infinite mile" coverage, but that is only on the drive unit itself, i.e., the actual body of the car.

The infinite mile guarantee is a relatively new Tesla policy that retroactively covers all previously manufactured Teslas as well. This first of its kind warranty was spurred by a chain of events wherein multiple Tesla models were running into problems with longevity regarding substantial parts within the drive unit. But the one part of the car that never faltered was the battery.

The Tesla battery is under warranty for eight years, or 50,000 miles, whichever comes first. As you may recall 50,000 miles is typically when Tesla'/ca/en/s begin to show the first signs of gradual failure. While some consumers point to the 50,000-mile mark as a point of contention, most Tesla owners never even notice a change in their battery'/ca/en/s ability.

Overall, the battery capacity of the Tesla is significantly more impressive and more durable than its predecessors and contemporaries.
The Tesla battery is a feat of modern engineering that seems to be one of the company'/ca/en/s greatest achievements. All indications from Tesla, whether it'/ca/en/s a snippet of early press, or the recent "infinite mile" claim, point to their battery technology as being far and away superior to other cars.

According to the company'/ca/en/s founder and CEO Elon Musk, Tesla vehicles are designed for a one million mile life. If this claim is valid, there will be many Tesla owners who will only ever have to buy one more car for the rest of their life.

Then again if this claim is true, the rise in Tesla ownership will be swift and long-lasting. This claim certainly piques the interest of any future car owner whose primary point of contention is long term reliability, longevity, and durability.

The rise of the electric car has put to rest all of the crutch arguments that were once used to keep the gas-powered vehicle at the top of the automotive food chain.

The Tesla especially has proven that electric vehicles can be the safest, just as cost-effective, and more powerful than its gas-powered car equivalents.

Charging at a Tesla Supercharger station will cost you about $0.25 per KWH. On the other hand, having your own charging station will definitely save you on costs.

Plus, with a home electric car charger becoming more convenient than visiting a gas station and a more sustainable option, it’s no wonder that these cars are becoming more popular resulting in an increase for commercial charging stations.

Need a Tesla EV charging station? With JuiceBox, get all the power you need now and future proof your electric vehicle driving life with a universal charging station. Our smart home EV chargers are compatible with all electric cars—perfect for Tesla drivers who own or plan to own more than one make of EV.